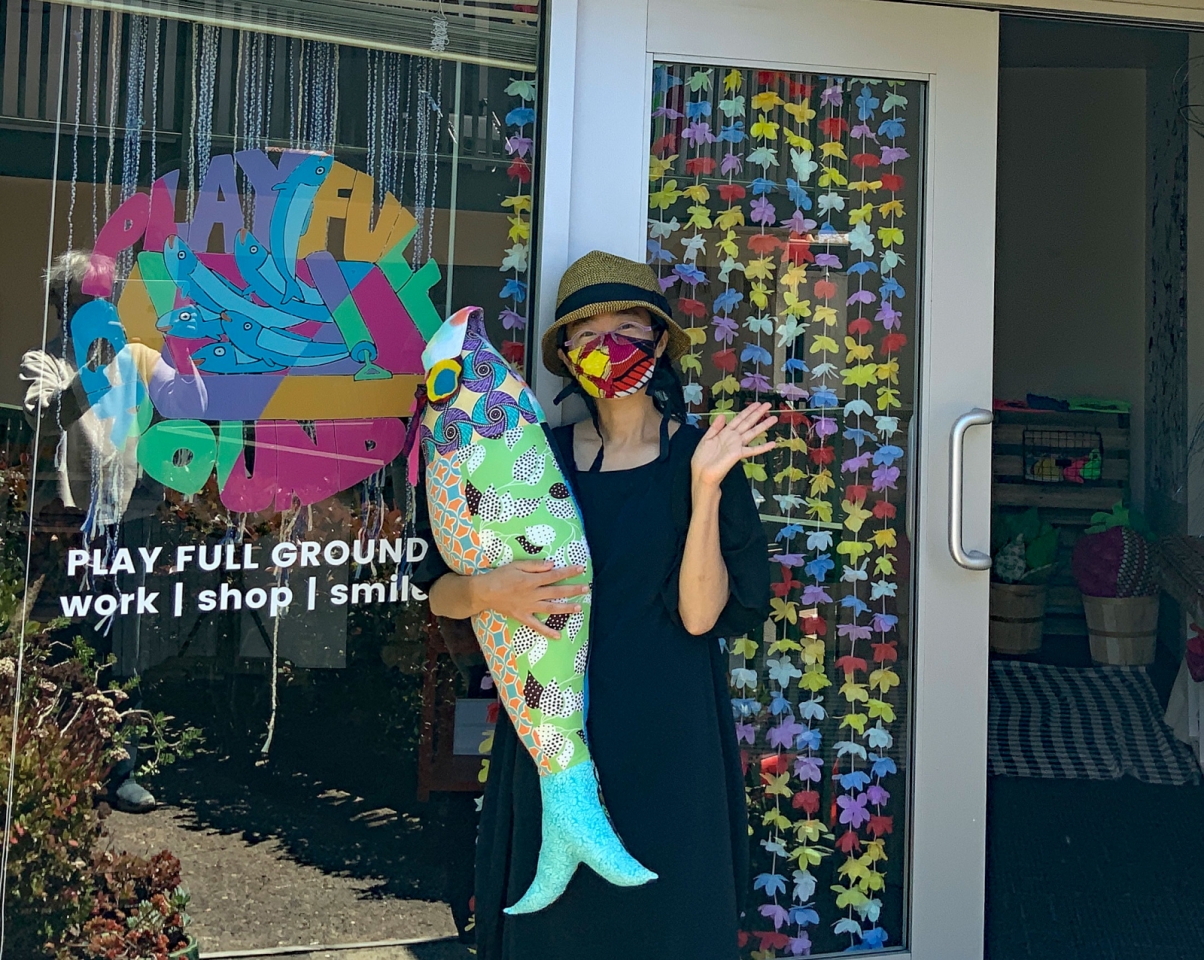 The owner of Play Full Ground, artist Mai Ryuno, recently created and shared a video about her art and life on YouTube, including artwork she had not yet shared with the public. Like Mai, the video is thoughtful, playful, and really interesting. We encourage you to check it out.

During the pandemic, Play Full Ground has made a shift from sharing creative experiences and learning in-person at the studio, located at 550 Lighthouse Avenue, Suite E in Monterey, to sharing ideas through online platforms such as Instagram, Facebook, and YouTube.

Mai is also selling some lovely holiday gifts in Play Full Ground's online store, including Happy Monterey Sardine pillows and hand printed t-shirts and tote bags, all designed and made by her. Let's support our friendly local artist. 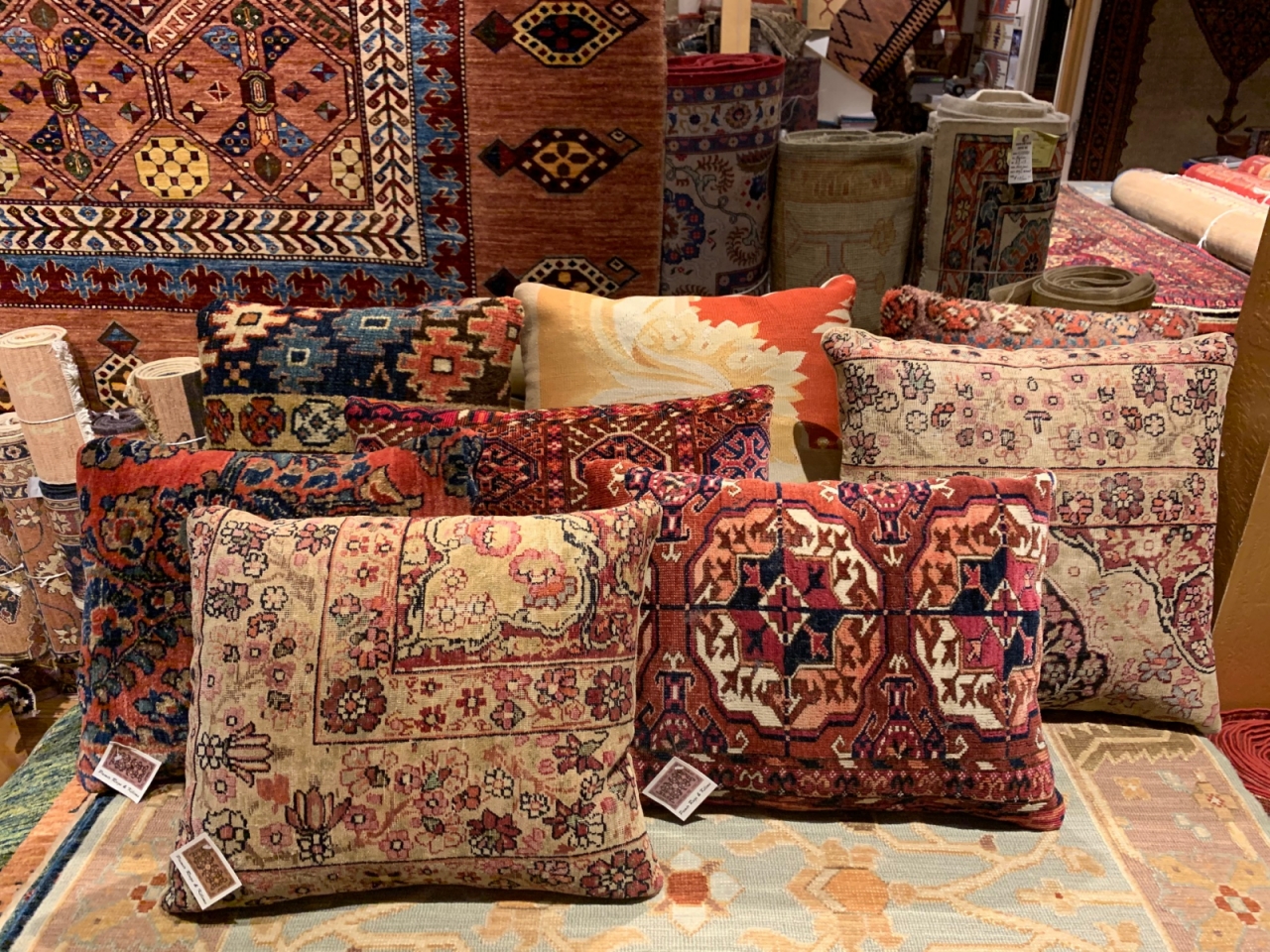 Trying to find the right gift for a loved one? Pamir Rugs & Kilims has a distinctive collection of handmade pillows for sale, created from antique rugs. These unique pieces come in many colors and designs. We invite you to stop by our showroom at 237 Lighthouse Avenue in Monterey and take a look!

Drop off your Clothing Consignments at Resold Threadz 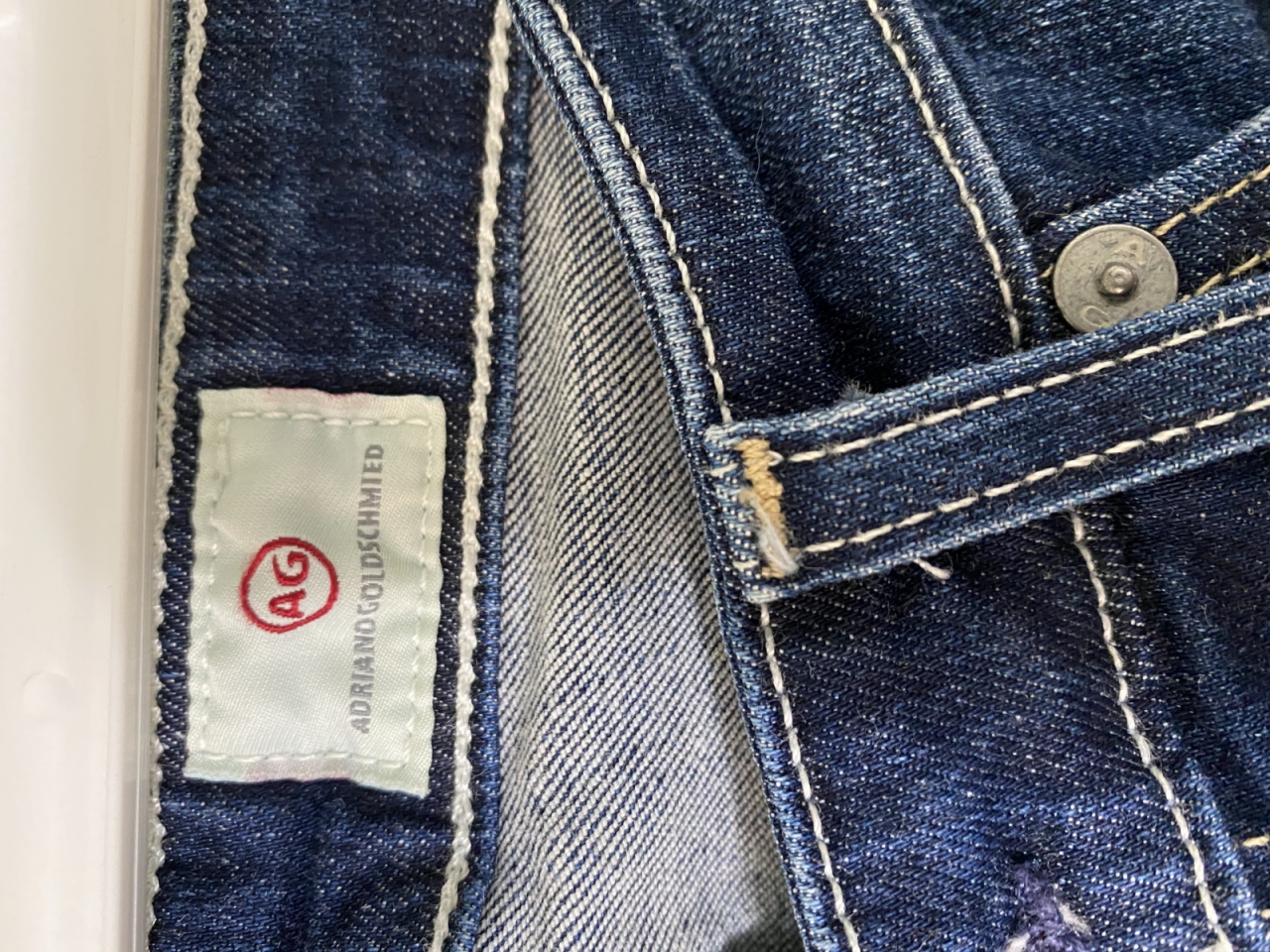 Resold Threadz, located at 800 Lighthouse Avenue, Suite B in Monterey, is now accepting clothing and designer bag consignments. Please call us at 831-297-6370 or email us through our website to make an appointment.

Posted on November 28th, 2020 by lighthouseave

Let's plan for sea level rise in Monterey! The City of Monterey is hosting a community meeting online to discuss the Transportation Sea Level Rise Adaptation Plan on Monday, December 8 at 7pm during the regular Planning Commission Meeting. The program will include: a summary of previous sea level rise studies and outreach efforts, an introduction to the three adaptation strategies, and the gathering of community input.

Three strategies have already been identified to keep Monterey moving in the face of sea level rise:

1. Elevate the Recreation Trail into a sea wall or protect it behind a sea wall.

2. Elevate Del Monte Avenue into a viaduct with ocean water flowing underneath.

3. Move Recreation Trail and Del Monte Avenue traffic to Pearl and North Fremont Streets with enhancements made to these streets.

The draft of the Transportation Adaptation Plan is available for viewing here.

All Monterey residents are welcome at the meeting. To participate, please log in to the Zoom meeting (details on the second page of this press release) or you can view without participating on YouTube. 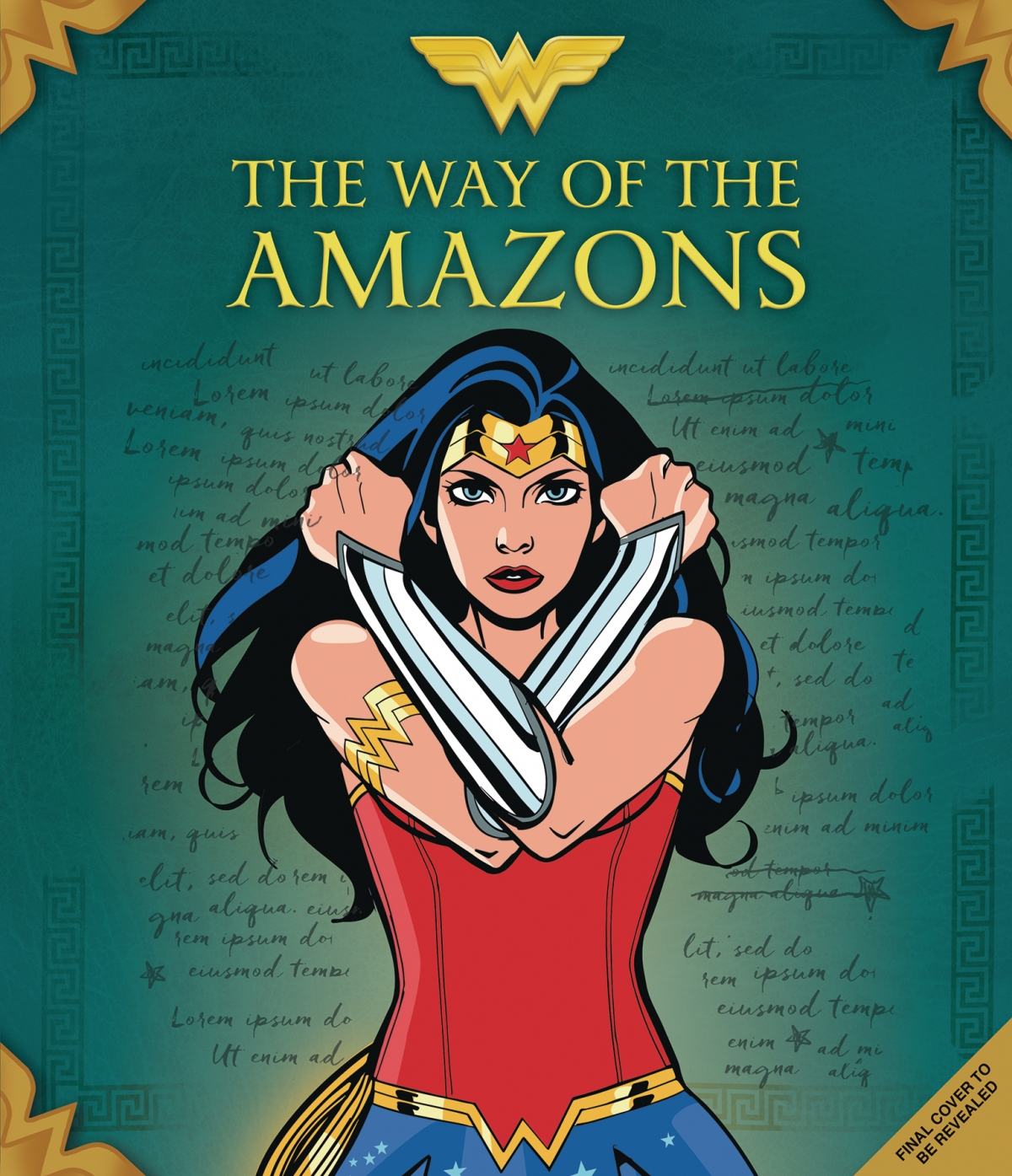 Just in time for holiday gift shopping, Current Comics presents a guide to some of the great books and proven best sellers we have in stock. Visit us at 400 Lighthouse Avenue in Monterey while supplies last, or you can click the links below to visit our online store.

Feel free to call us at 831-333-1085 to ask our staff for more information or recommendations. We're happy to share our knowledge of and enthusiasm for comics and graphic novels with you.

X-Men: The Art and Making of the Animated Series
If you loved the 90s X-men animated series, you’ll love this book filled with never-before-seen character pictures and interviews with the cast and creators.

The Boys: Omnibus Vol. 1
The smash hit series on Amazon, "The Boys," is based on this comics series for mature readers and we have all 6 volumes in stock. Just search “Boys Omnibus” in our online store to see them all.

Old Guard Book 1: Opening Fire
This book for mature readers was adapted into an amazing movie on Netflix starring Charlize Theron as the protagonist.

The Infinity Gauntlet
This is the story the movies "Avengers Infinity War" and "Avengers Endgame" are based on.

Crossover #1
A recent release by best-selling writer Donny Cates (Venom, Thanos, Thor, Cosmic Ghost Rider, Guardians of the Galaxy), this new series from Image Comics is going to be huge! The story is set in a world like ours in the last-standing comic book store a few years after fictional superheroes we all know have appeared on the streets. Which superheroes have appeared...and what does their appearance mean for us? It's a world where reality is dead and anything is possible.

Wonder Woman Earth One Vol. 1
A retelling of the Amazon warrior’s origin with some awesome new detail and characters by best-selling writer Grant Morrison.

Wonder Woman: The Way of the Amazons
Great for younger readers, this book contains the history of and meaning behind Diana’s weapons, outfit, home (Themyscira Island), and more.

Posted on November 28th, 2020 by lighthouseave 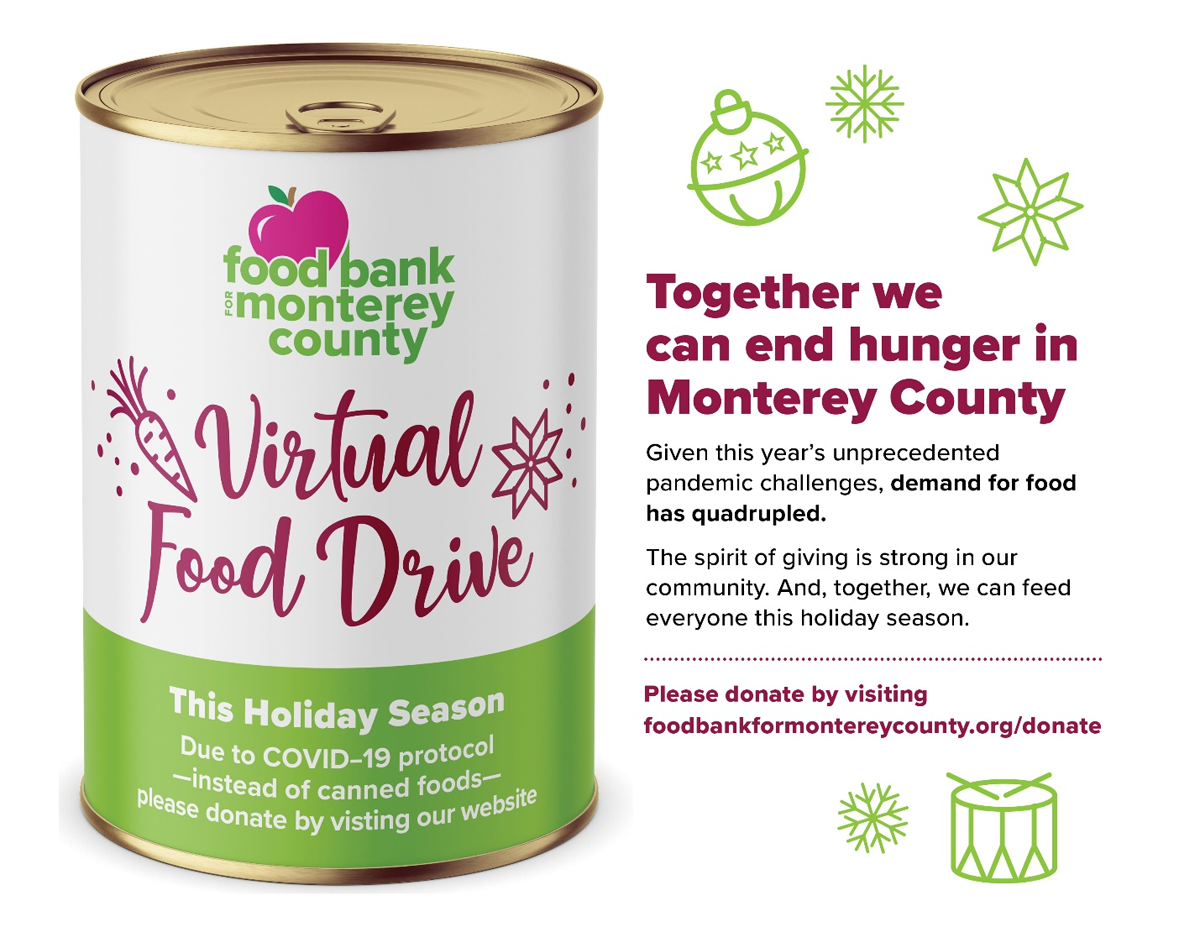 Because of the pandemic, the Food Bank for Monterey County is holding a virtual food drive this holiday season. The need has never been greater: food donations have dropped by 56% while need has quadrupled. Instead of giving canned and non-perishable food, the Food Bank asks the community to please donate money which they can use to purchase necessary goods. No gift is too small! To donate, please visit their website.

Your monetary donations allow the food bank to make bulk purchases and leverage discounts so they can buy more food per dollar. One hundred percent of all donations to the Food Bank for Monterey County stays local to help our most at-risk communities through this emergency.

Posted on November 23rd, 2020 by lighthouseave 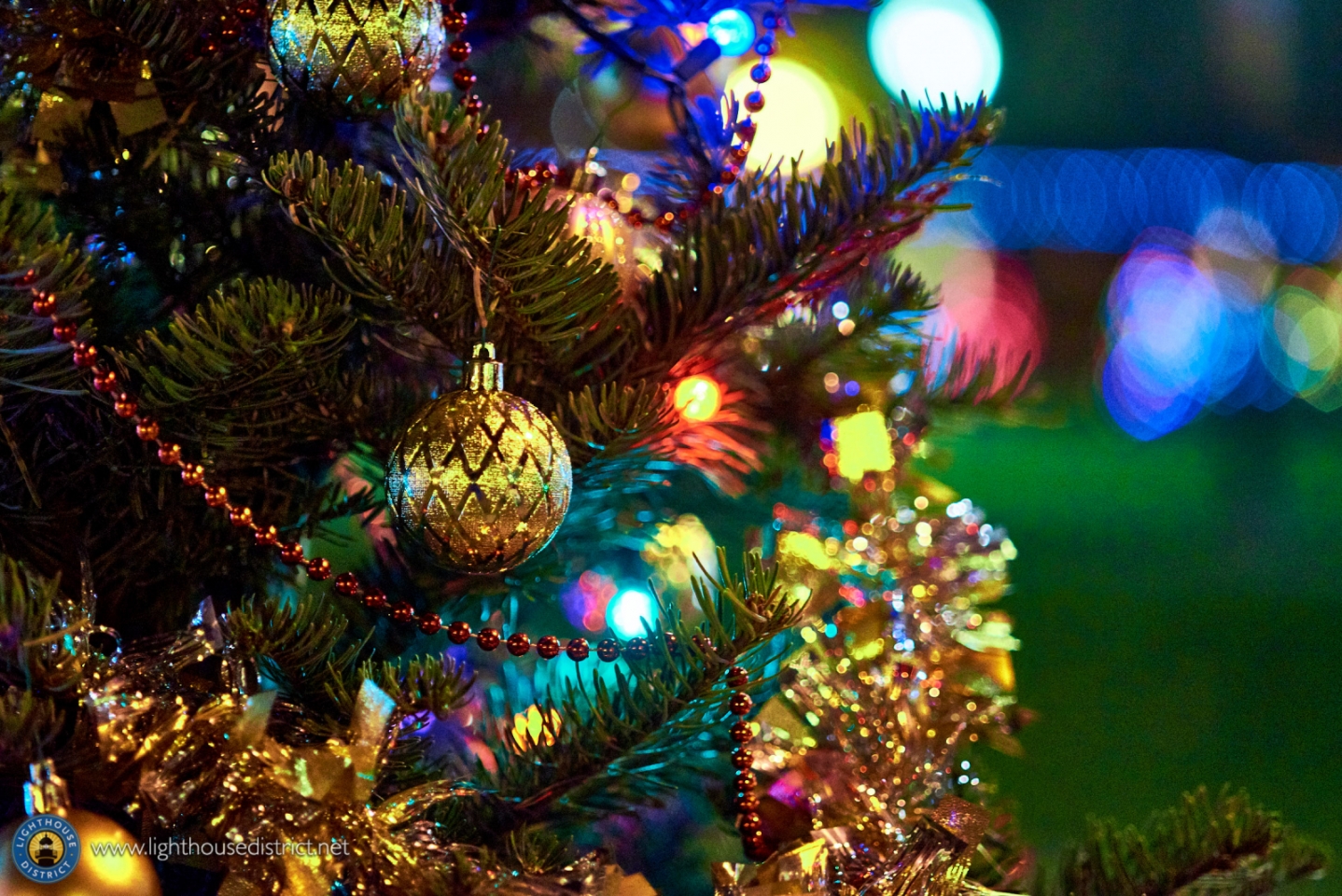 Are you sheltering-in-place? Just look for a gift in the Gallery, click on the photo, and you'll be taken to the shop's online store or to a page with their contact information. Many shops welcome orders online or over the phone and offer curbside pick-up and shipping.

When you shop locally you help keep small businesses open in these tough economic times, reduce environmental impact, and always find the most creative, thoughtful gifts.

Posted on November 19th, 2020 by lighthouseave

2020 - what a year... But we've made it this far. So take a deep breath, people. We're gonna do this holiday thing together - small and bright.

You want to give someone a gift to make them smile? The Lighthouse District's got you covered. We have clothing and fashion accessories, home decor, books, bikes, dive and surf gear, and a lot more. View our Holiday Gift Ideas Gallery to get started.

We're selling gifts in-store, online, and over the phone. Many shops are offering curbside pick-up and shipping - view our Shelter-in-Place Mall for the list. Most of our stores are staffed by the owner, so our customer service is the best.

Small Business Saturday, a celebration of small, locally-owned businesses traditionally held on the Saturday after Thanksgiving, may come and go in a daze this year. So let's celebrate all season long. Happy holidays from all of us on Lighthouse Avenue in New Monterey, and please...Shop Small.

BookBuyers is having a big sale over Thanksgiving weekend, November 27-29. Buy 2 books, get 1 book free. Buy 1 movie, get 1 movie free. Visit the shop at 600 Lighthouse Avenue in Monterey. We're open Sunday-Thursday, 11am-6pm, and Friday and Saturday, 11am-8pm. We'll be closed on Thanksgiving Day.

BookBuyers sells used books and media as well as brand new calendars, all at an affordable price.

BookBuyers now has in stock a selection of 2021 calendars, including those created by photographer Michael Santa Cruz. Featuring beautiful photos of local scenery, Santa Cruz's calendars make perfect gifts for family and friends! Stop by the bookshop at 600 Lighthouse Avenue in Monterey and check them out.

Star Wars Mandalorian Tees at On The Beach 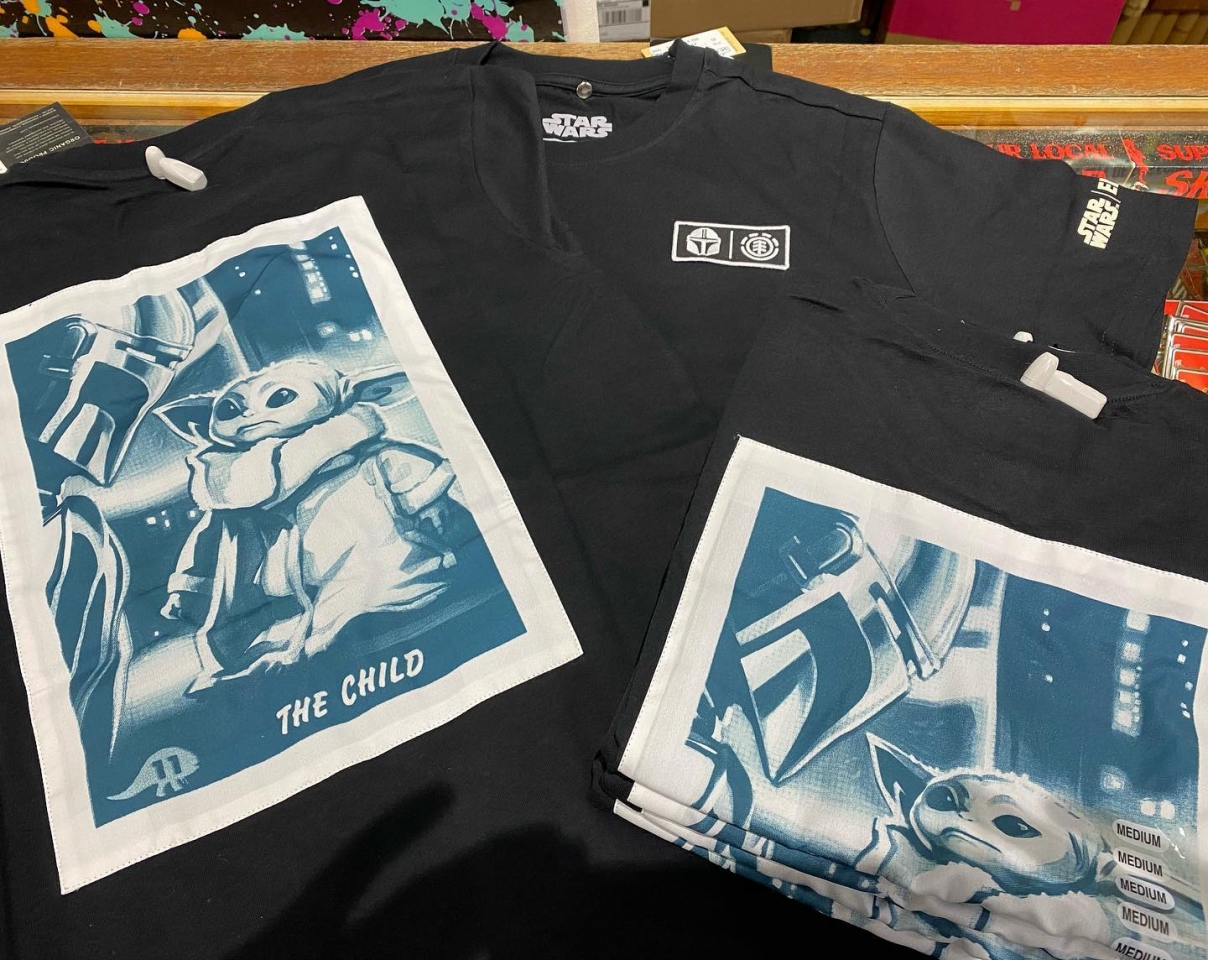 On The Beach Surf Shop now has new Star Wars Mandalorian tees by Element in stock! Come check them out before they’re gone. We're located at 693 Lighthouse Avenue in Monterey. 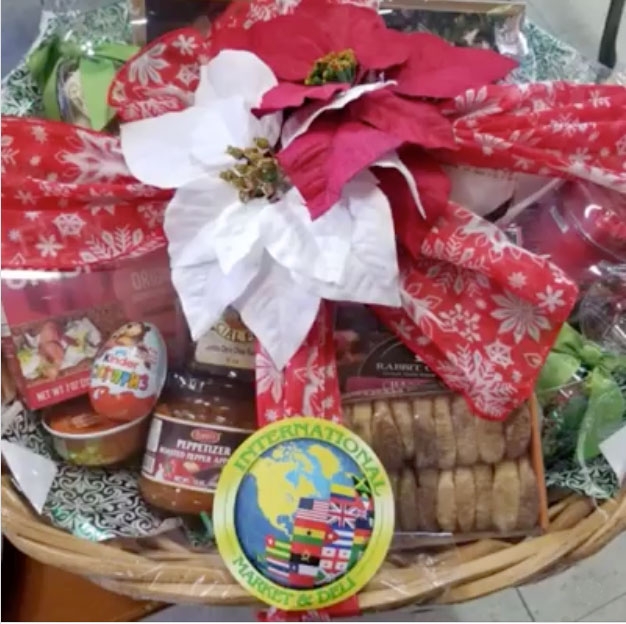 International Market and Deli is offering gift baskets made to order for the holidays. Filled with food from around the world, these make great gifts for friends and family members. Call us at 831-375-9451 or e-mail us and let's work together to select the right items for your basket.

International Market and Deli is located at 580 Lighthouse Avenue in Monterey.

Considering the shorter days this time of year, it's more important than ever for cyclists to have a solid set of bike lights. All-weather headlights and tail lights provide visibility at night and help you stand out during the day.

Epicenter Cycling has just the right light(s) to suit your needs, whether you're a night-riding trail shredder, bike commuting 9-5er, or weekend asphalt slayer. Just swing by the shop at 230 Lighthouse Avenue in Monterey to check out the latest and greatest items to assist with visibility. 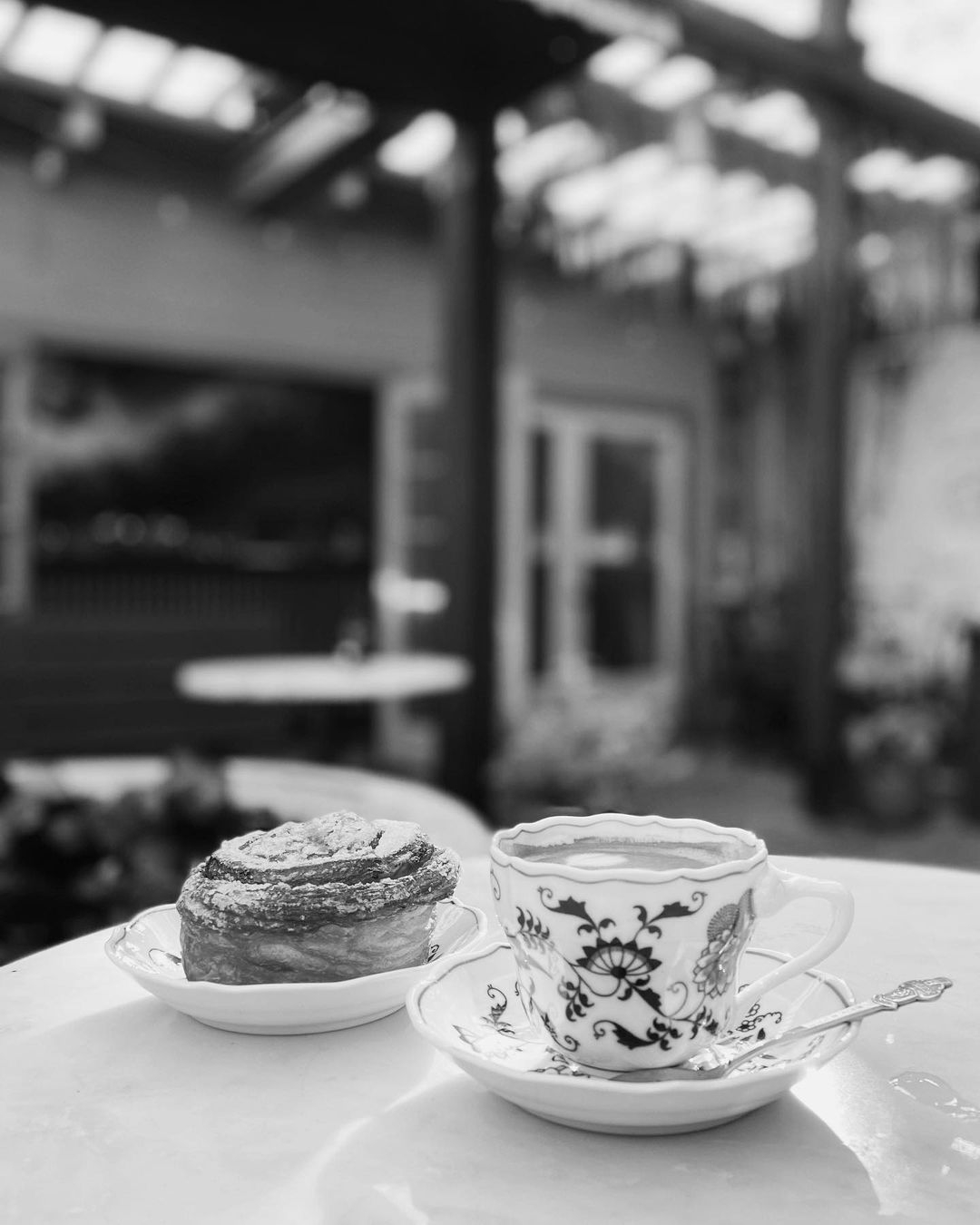 Bad news: we are closing our outdoor coffee shop for the fall and winter season. Thank you to everyone who visited the secret garden patio in the mornings and afternoons for coffee and pastries!

Good news: we are adding another day to our cocktail bar schedule. Beginning November 19, Pearl Hour will be serving cocktails and sushi on the patio Thursday - Sunday. Contact us for exact hours.

Posted on November 18th, 2020 by lighthouseave 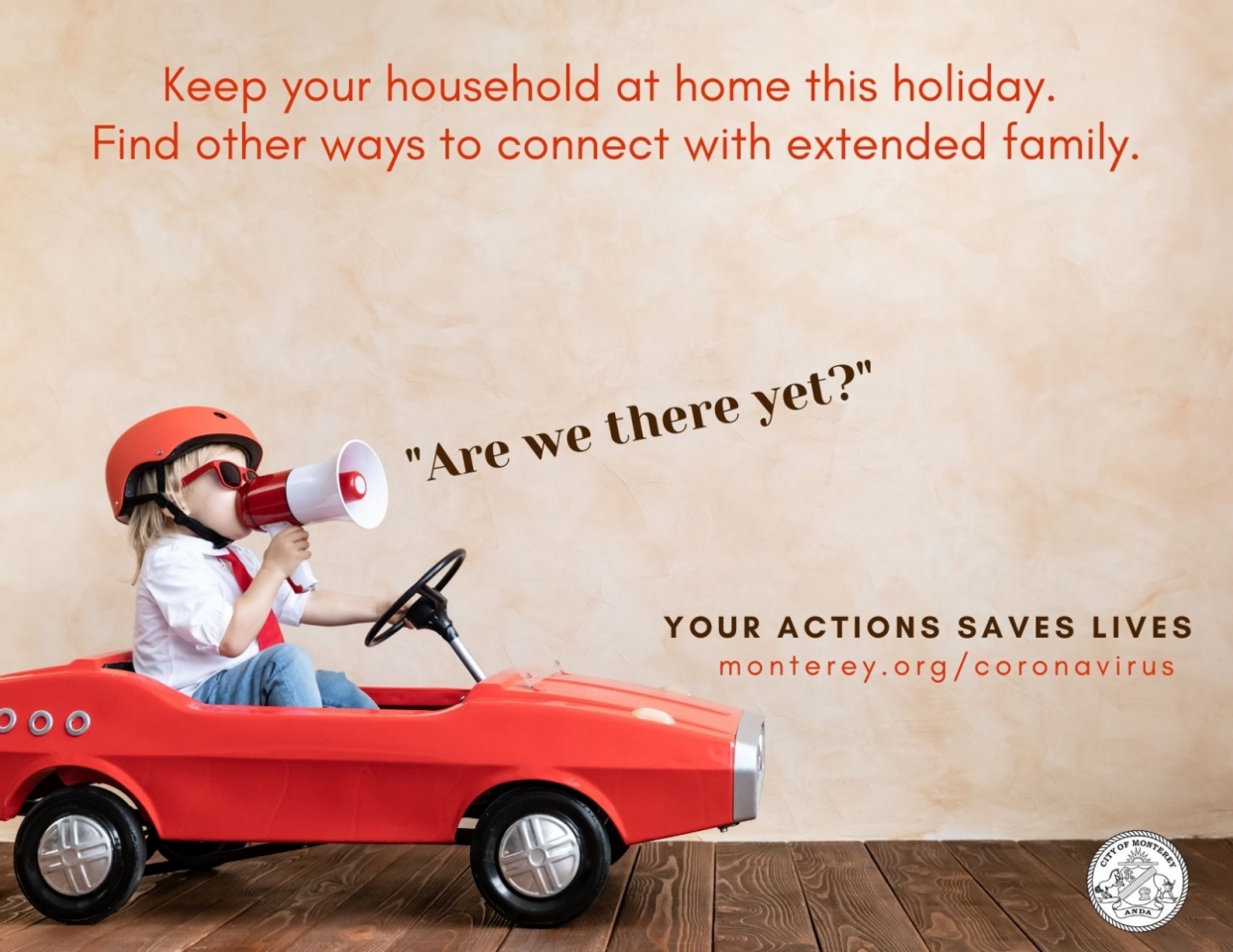 From now through Thanksgiving Day, the City of Monterey invites you to enter to win a Monterey 250 commemorative poster celebrating Monterey's 250th birthday in our #GiveThanksNotCovid Campaign.

How to enter the drawing? Go on social media and share one or more of the 16 digital postcards available for download. Be sure to include the hashtag #GiveThanksNotCovid and tag @CityofMonterey.

Not on social media? Participants can also choose to share via text or email to family and friends. Email [email protected] and let us know which postcard(s) you shared and you will also be entered to win a poster.

This year, let's give thanks, not Covid-19. As NYC ER Doctor Craig Spencer writes: "If you could see a Covid-19 patient struggling to breathe like we do in the ER, you’d immediately understand why we’re so worried and why it’s safest to cancel your in-person family meetups over the holidays. Next year will be safer and we’d like all of you to be there for it."

November 14 and 15, new consignment boutique Resold Threadz is offering 20% off your complete purchase. Stop by and say hello - we're located at 800 Lighthouse Ave. in Monterey.

Lilify is excited to introduce the result of our collaboration with talented local ceramic artist Vanessa Cowdrey. This exquisite modern take on an ikebana vessel is available in three stackable sizes. Vanessa created these circular vases with an exposed white claybody (stoneware) and a clear glazed, watertight interior. The vessels can also hang on the wall.

Made in Monterey and available only at Lilify, you can purchase them online or in our store at 281 Lighthouse Avenue in Monterey.

Thanksgiving may be celebrated differently than in years past, but that doesn’t mean it can't be done in a festive way. We all know that outdoor, physically distanced small gatherings are safer than indoors. Chic Event Rentals is here to provide you with outdoor tables, chairs, lighting, heating, and more to make the atmosphere bright and comfortable.

Chic Event Rental is now offering a 10% discount on all Thanksgiving rentals. Simply mention this ad when placing your order. Please call us at 831-375-1055 or email us for more information. Locally owned, our showroom can be found at 485 Lighthouse Avenue in Monterey. 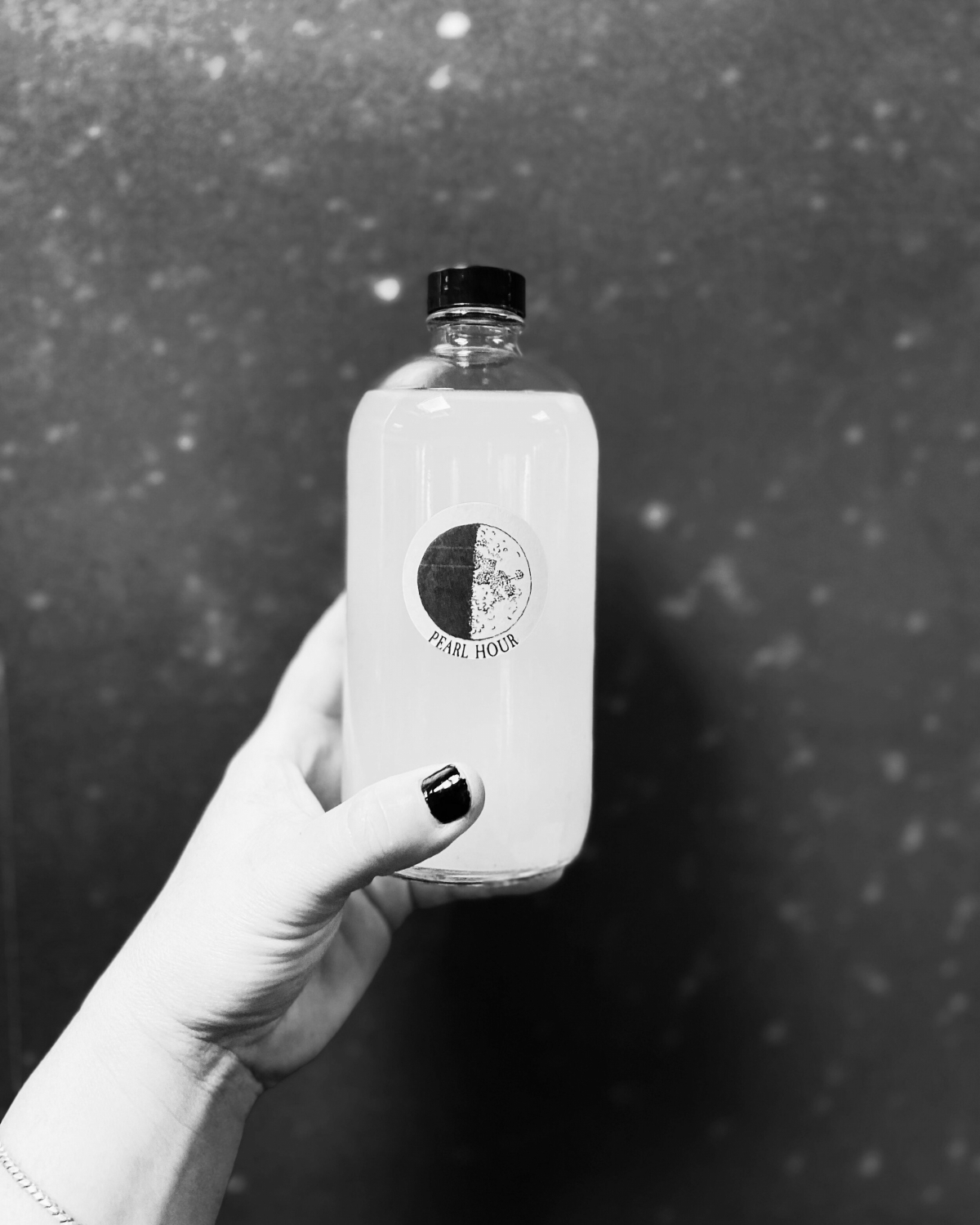 Looking for the right drinks to complement your Thanksgiving dinner? Pearl Hour has curated a menu of bottled cocktails, Amari, and sparkling wine for your fall feast. Order online by November 23 at midnight for a November 25 pick-up, 12pm-6pm, at Pearl Hour at 214 Lighthouse Avenue in Monterey.